In 2011, I wrote a three part article on the Oppo BDP-93 entitled TVs? We Don’t Need no Stinking TVs – Third Generation Multi-channel Audio.

The answer came from Secrets own Jay Haider. He pointed to three solutions from Sony. The Sony BDPS6700 Blu-ray Player is the least expensive. The Sony BDPS6700 lists for $180 but is currently $90 at Wal-Mart. I just purchased it as a back up to my Oppo.

Since the Sony BDPS6700 is two pounds, it moves when you push to close the disc draw. The BDPS6700 feet are almost not existent. It will scratch your expensive components if you do not put some protective material below it. If I were not doing my Jack Benny imitation, I would have purchased the UDP-800.

I tested no video functions at all on the BDPS6700. I have no idea of HDMI compatibility issues with expensive TVs. See the title of this article. It locked to my AVR in HDMI 1.1 without looking at the manual and I was thrilled. Multichannel SACDs were playing 10 minutes after I opened the box.

I had it playing FLAC files within an hour of opening the box, never touching a setup panel. Using my 2TB portable Seagate USB drive (I put all my download files on that drive) it played 96k sample / sec FLAC stereo files, 96k sample / sec FLAC multichannel files and 192k sample / sec FLAC stereo files. That function was introduced on the Oppo BDP-93. On the DSD side, it plays stereo or multichannel files and will play a Double-DSD (DSD128) stereo file. That function came later on the Oppo BDP-103. It also does .wav, mp3 and AAC. It does not support the exotic Quad-DSD (DSD256) or DXD. Below is a screen scrape from the Sony website.

It played my one Blu-ray. You can watch the orchestra on this disc. I do not like that because they focus on the oboe when I want to look at the trombones playing the harmony. I can look at anything I want to live. Note the name of the article. Opera fans will have a bigger stack of Blu-rays.

Audio Blu-ray works in stereo and multichannel. For CD and SACD, the TV can be off. For studio Blu-ray, the TV is only needed for setup. They are still producing classical SACDs and they get reviewed in multichannel in current editions of classical music review magazines (American Record Guide and Fanfare). Double CD/SACD issues are very rare now, if you want to purchase, for example, a BIS disc you will be purchasing an SACD.

The Sony BDPS6700 has no DVD-A support unfortunately. As mentioned above, the more expensive, better built, UDP-800 supports DVD-A. I have a number of DVD-A discs but I have the original Oppo DV-980H, which still works, as a backup unit to play DVD-A. The Oppo DV-980H was the first player to transmit SACD and DVD-A down HDMI. The DV-980H was a revolution in the simplification of a multichannel audio setup. If you have a significant number of DVD-A’s with no back up player, go with the Sony UDP-800.

I checked the Sony BDPS6700 for playback of DVD, DVD-R and CD-R and had no issues.

I did not check Wi Fi or if it can find music files off my computers using Ethernet.

It has no analog audio support at all. You need HDMI for multichannel and DSD. It will send DSD if your AVR supports it. If your AVR does not support DSD, the Sony BDPS6700 switches to LPCM transcode automatically. 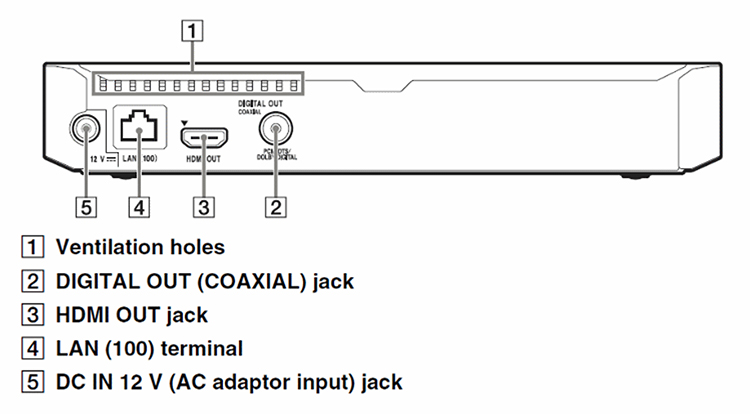 The Sony BDPS6700 rear panel with identification of each I/O.

You must have a TV with HDMI to see the control screen except for CD or SACD. If you want to hear an SACD in stereo or multichannel, you must have the player connected to a unit that decodes HDMI 1.1 audio. The Sony BDPS6700 has a Coax out but that is limited to 96k sample /sec LPCM. DSD data or its LPCM transcoded form cannot be legally transmitted of S/PDIF.

On the audio side with HDMI, the Sony BDPS6700 does what the Oppo did but the Oppo’s build quality is several orders of magnitude better. The Sony UDP-800 is better built that the Sony BDPS6700 but still is not built like an Oppo. Many used the Oppo’s analog outputs. That is gone now with no replacement.

With the Sony BDPS6700 in the equipment rack, a computer is not required. I navigate my USB drive from the TV menu created by the BDP6700. I have a 19 inch 720p TV but that is too large for an audio only system. You can get a 13 inch with HDMI but they cost a lot more than the 19 inch. I will likely replace the giant screen 19 inch at some point for the more sensible 13 inch so everything fits in the equipment rack.

Using the Coax out into a stereo audio component makes sense if you have audio equipment without HDMI and you want to banish a computer. You have instead introduced a TV which is much cheaper. DSD support even transcoded is lost with the Coax.

For those of you who want a stereo-only SACD player with analog out, be prepared to pay at least $2000. If that is your budget, get an AVR with good room correction and one of the Sony’s for less if you can tolerate a small TV in the equipment rack.

As far as I know, it is impossible to play multichannel files without using a computer and its USB output. You will not find a six channel DAC. Other solutions run to five figures using professional interconnections. SACD playback is impossible regardless of what you pay when using a computer.

I am thinking about getting another Sony BDPS6700 as another spare. It is built as you expect for a $90 A/V component. I cannot say how long it will last.

On the HDMI audio side, an Oppo replacement for $80, discounted, for playing higher resolution files.

Both resolved in the more expensive Sony UDP-700.