Up NextAmplifi HD Mesh WiFi System Review
I am not a “cable guy” by any means.

However, several years ago at AXPONA, I met audio icon Siegfried Linkwitz (RIP) and auditioned his ORION open-baffle speakers with ASP active crossover and Bryston amps. Yet amidst Mr. Linkwitz and all that incredible gear, I found myself fascinated by, of all things, the thick plastic tubes at the end of his speaker cables!

I had never seen anything like the connectors Mr. Linkwitz used to feed 4 channels of Bryston amplification to each ORION speaker. Mr. Linkwitz patiently explained that the connector was called “Speakon,” made by Neutrik, and common in pro audio because they were robust and allowed rapid and idiotproof connection of multi-amped speakers. He also opined that more people should use them for Hi-Fi. 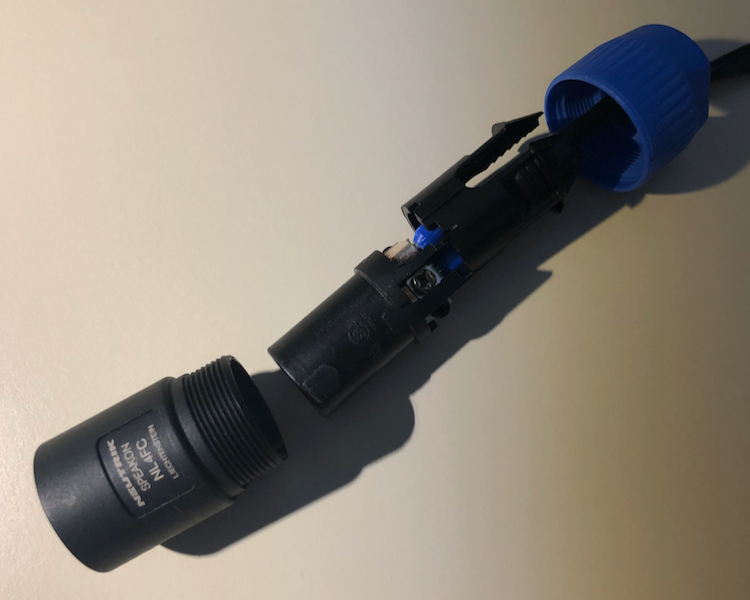 As the late Mr. Linkwitz knew, Speakon has a number of advantages over the banana plugs or spade lugs we audiophiles typically use.

–Superior mechanical connection. The individual conductors are secured by set screws, with a twist: instead of the set screw directly poking into the wire as occurs in many “high end” home speaker terminations, the screw acts on a lever that clamps down evenly on the whole wire. 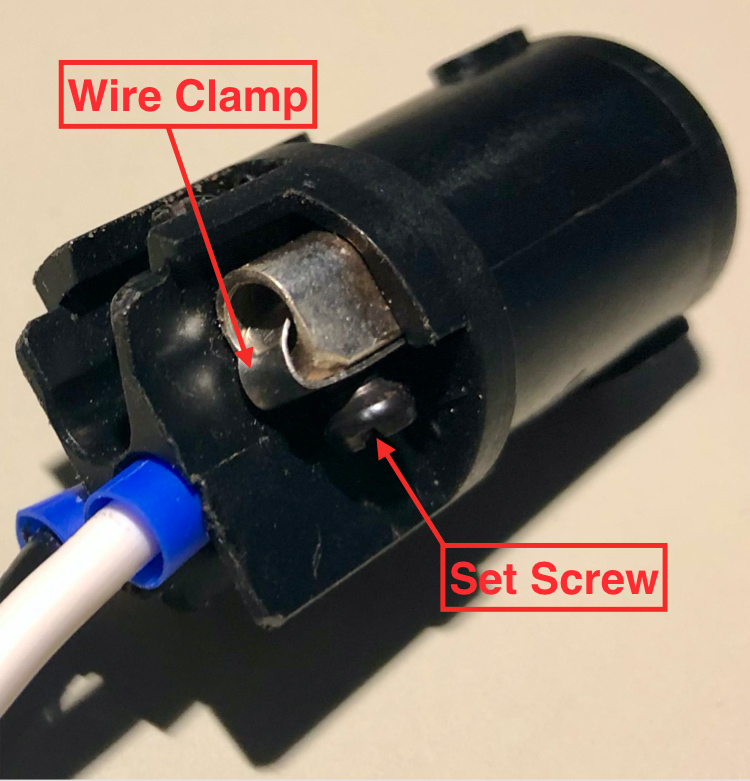 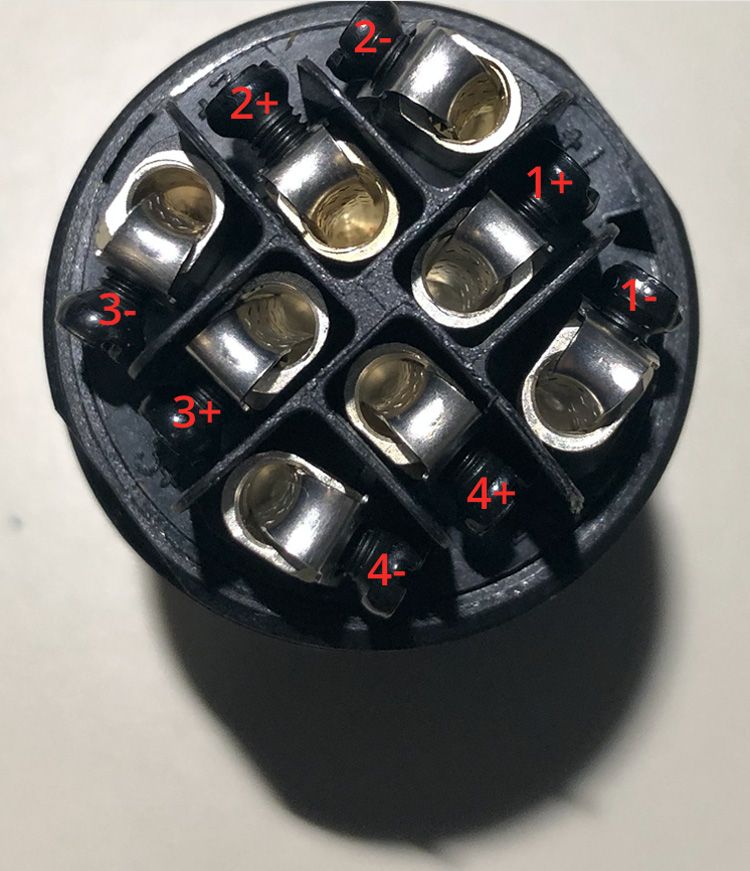 -Insulated contact points. It is easy to tap a pair of banana plugs or spade lugs together, which may short an amp channel. However, speakON plugs and terminals have spring-loaded contact points buried inside insulating plastic. These points press tightly against each other when you twist the connector locked and wipe themselves clean when inserted or removed. This connection is so mechanically stable that a Speakon can carry 40 amps of current, or 6400 (!) Watts into 4 Ohms.

-Potentially lower distortion! According to an application note by studio and audiophile stalwarts Benchmark Media, “these robust connectors provide a much more reliable connection than the binding posts, spade lugs, pins, and banana plugs used with traditional Hi-Fi amplifiers. Our tests showed that non-locking banana plugs usually produce measurably higher distortion than NL4 connectors. Furthermore, the performance of spade lugs and locking banana plugs varied while the NL4 connectors consistently provided top performance.” Is that audible? I doubt it. But it is still good to know Speakon keeps the signal as clean as possible.

-Low cost. Even though Neutrik produces Speakon plugs in a high-wage, high-benefits country (Lichtenstein) and uses high-quality materials such as silver-plated contacts, today a 4-pole Speakon connector (equivalent to four banana plugs or spade lugs) costs under $6 and the matching terminal is under $3. It makes one wonder why Hi-Fi speaker connectors cost as much as they do, though audiophile suppliers don’t have the equivalent scale to Neutrik. There are also generics, though with the original so reasonably priced I see no rationale for them. If turning some screws is too much DIY, Speakon terminated speaker wires are available from connectors from Benchmark, pro audio shops, and online venders such as Redco or Markertek.

Is Neutrik’s speakON perfect? Not quite. Speakon connectors are deeper than most Hi-Fi connectors, though Neutrik offers a 90-degree version shown above as well. Also, the set screws are an unusual size in the US, 8-point #1 Pozidriv. A Philips screwdriver can ruin the set screws. 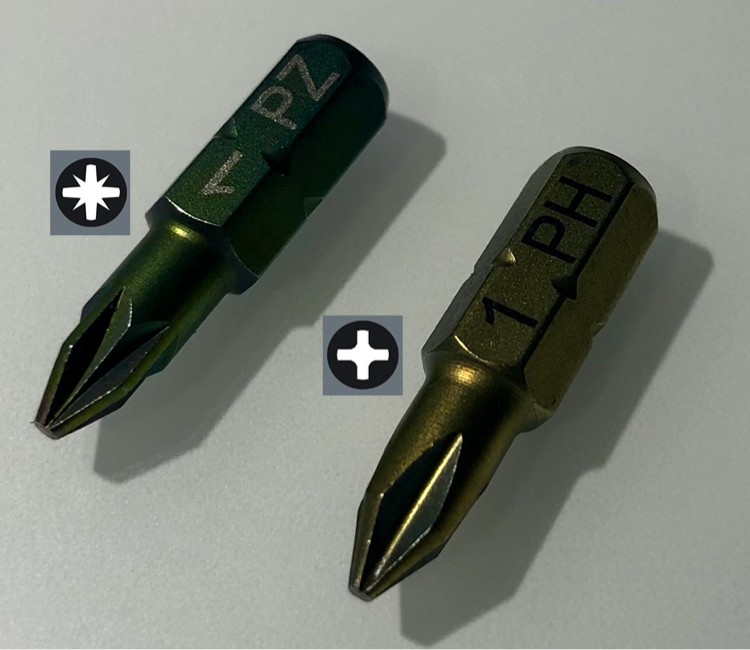 Well great, you might be thinking: these connectors may be great, but my gear has normal audiophile binding post so I can’t use them anyway. I do not recommend modifying gear just to use a different speaker connector! However, Speakon offers huge advantages in custom installation wiring. For example, 20 channels of speaker connections fit in just 4 gangs of space behind our media cabinet. 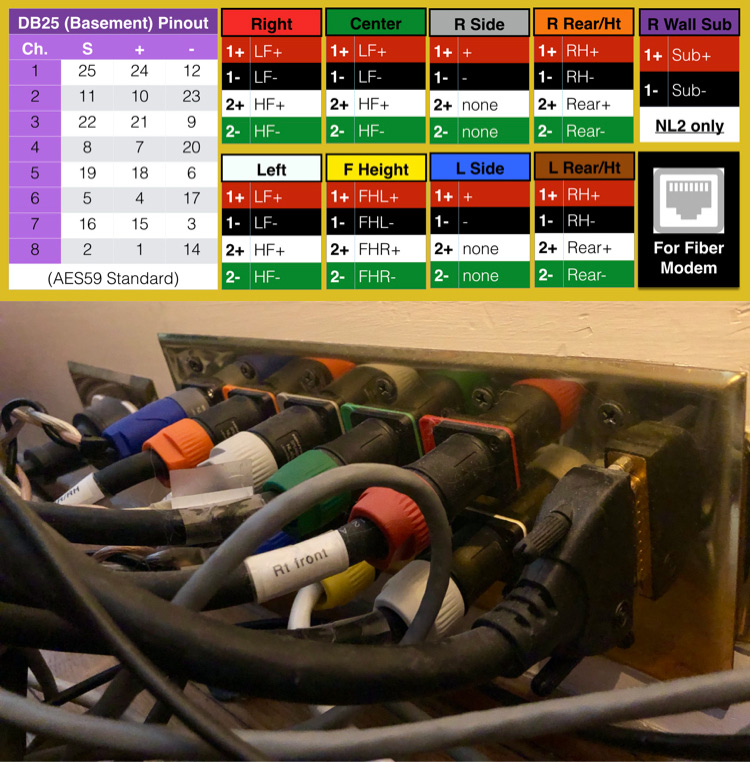 I would not want to deal with 40 binding posts!

Another obvious use for Speakon connectors is for DIY projects or custom cabinetry. 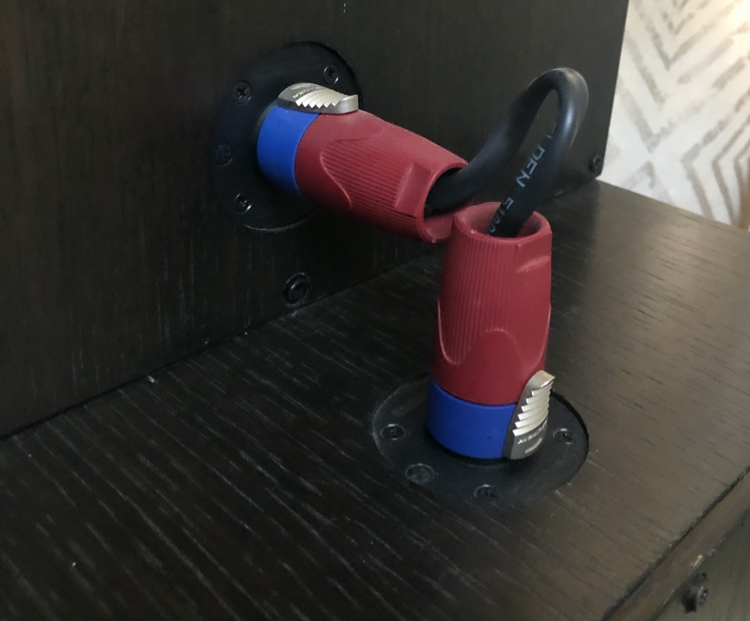 If given a choice between Neutrik Speakon and any other current speaker wire connector, I will pick Speakon every time.