Up NextG.E.M. Dandy Hydraulic LP Cleaning Apparatus MKII
Some of us work outside or in the garage all day, and we need a tougher solution for audio.

Delicate systems won’t last but a few minutes in some of the rugged, dirty, and wet conditions of a job site. That’s why professional tool companies offer some of the toughest audio systems available. I considered the top three brands that were also widely available from Home Depot, Lowes, and Amazon and are also widely used by most professionals. I chose two top-selling speakers each from DeWalt, Milwaukee, and Makita. I don’t hold a bias to any of these brands; I own tools from all three just as I buy the best each has to offer. Let’s get started!

What exactly makes a job site speaker/radio different? A few things actually. Heavy-duty construction with protective bumpers, rubber covering for inputs, and metal roll cages is a must. Bluetooth is common among all the speakers as well as battery and corded power options. Being able to listen to music and have the speaker survive are the two main design goals so let’s find out who does it best! 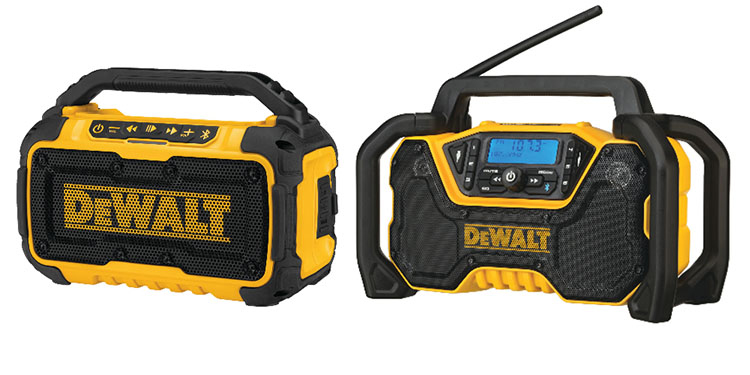 DeWalt offers a few options for portable, tough audio with seven models available on their website at the time of writing. I was able to check out the DCR010 and DCR028B. The DCR010 is a compact speaker with very sturdy feeling front buttons and easy to read labels. It plays loud and is quite durable, but lacks severely in the high frequencies. Bluetooth works perfectly and I never had an issue connecting to it nor walking away into another room with my phone, it always remained connected. It’s a good option that can often be found cheaper than the other brands.

Both models can be powered by 12v or 20v batteries, or plugged into an outlet. The larger DCR028B felt bulky and odd to handle. The roll cage is just massive on this unit compared to other options but did sound better than the DCR010 in every way. DeWalt puts on a good effort here, but I don’t feel it’s the best of the three. 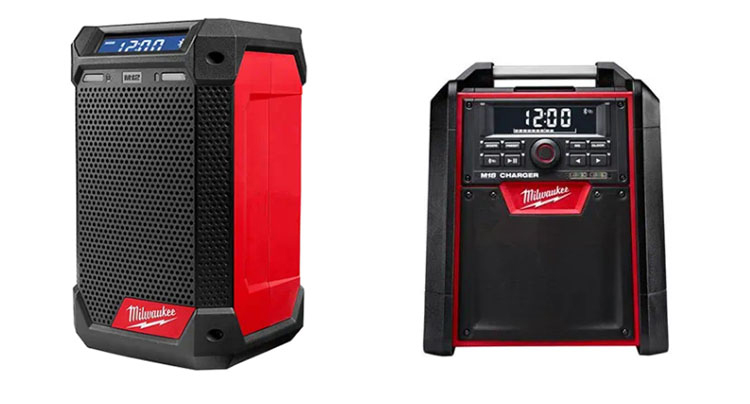 Milwaukee offers the most audio options with eight models available on their website. It’s clear from listening to all three brands that they sound the best, while also costing more than the others. They offer the best warranty too, five years versus three years for DeWalt and Makita. Two of the most common models are the M12 2951-20 and the M18 2792-20; the M18 2792-20 really sounded the most balanced of all the speakers I tested. Not hi-fi level of course, but better than the competition.

The M12 2951-20 is the most expensive speaker of all the ones I tested, but I would argue the audio quality is better. It first reminded me of the Sonos Play 1 in design, but more rugged. It’s also more feature-packed than the DeWalt with a built-in M12 charger and IP54 (dust and water-resistant) rating. Is it worth the extra $20? I think so, even though the audio is only slightly better. The larger M18 2792-20 is, in my opinion, the best sounding of all six speakers I tested; but it lacks M12 charging support where DeWalt and Makita support all battery platforms. Milwaukee doesn’t disappoint, but at the highest price point, I would expect just a bit more feature-wise. 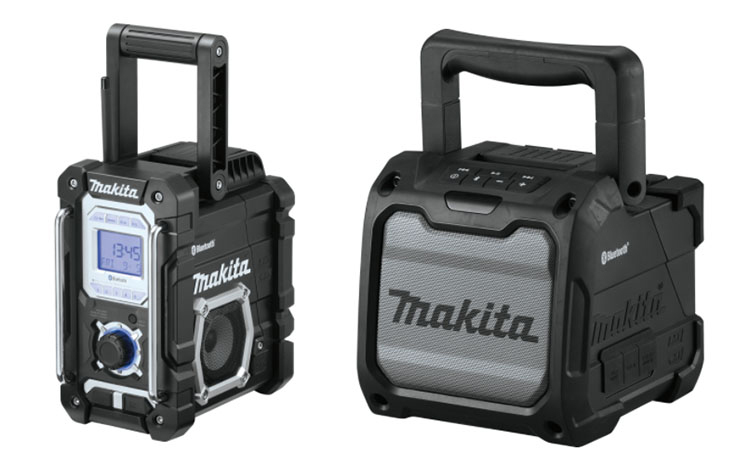 Makita offers the least number of models with only six available at present. Makita was the only brand to not offer a larger job site speaker; they only have compact options available. Two of their best-selling models are the XRM08B and XRM06B. Coming in the same price points as DeWalt, Makita seems to hit the middle of the road with their speakers; not the best, not the worst.

The XRM08B is a front-firing speaker, just like its DeWalt and Milwaukee counterparts. I felt it was better built than the DeWalt with a sound equal to the Milwaukee for $20 cheaper. It supports 12v and 18v charging which is an advantage over the Milwaukee. The XRM06B is a bit unusual, as it fires sound from the sides rather than the front like its competitors. Like its smaller sibling, it has the unique ability to completely hide and protect its battery; quite useful on dirty and wet job sites. Though the side-firing drivers are not my first choice for a portable speaker, it does perform well, though not as crisply as the Milwaukee. It sounds similar to the DeWalt but seems to fill large spaces a bit better.

At the end of the day, most people will pick the speaker from their favorite tool brand. DeWalt options were rugged and affordable while not sounding the best. Milwaukee brings the best sound, offers some unique features and the best warranty, but costs the most. Makita’s line offers feature-rich speakers with great durability but stays between the other two brands in audio quality. What speakers would I pick? If you need a compact job site speaker, check out Makita and if you want the best possible sound, go for one of Milwaukee’s larger models.