Up NextMartinLogan unveils updated Motion loudspeaker line
If you’ve read some of my previous posts on home networks, you know that one thing I love is mesh networks.

So, I jumped at the chance to review the Google Wi-Fi Mesh Network. If you haven’t heard of this before, mesh networks are basically like wireless access points, but the individual nodes piggyback off each other, with or without a CAT cable, allowing additional nodes to be placed farther out as long as they have access to power. Doing this with two to three or more nodes creates a Wi-Fi mesh that is often much stronger and more stable than a traditional network setup. Mesh networks are extremely useful in environments were wiring is limited or nonexistent.

With most mesh networks, setup is very easy and often done with an app on your phone, the same is true for Google Wi-Fi. Just download the app and follow the directions from there. When I added the second node about 20 feet away from the first, the setup app said there was a problem and to contact Google support directly, a very strange solution for a simple issue of incorrect node placement. Instead, I just moved the second node to a higher location and tried again and it worked. It seems the only issue was placement but apparently, the setup app doesn’t want you trying to fix this issue alone. This approach will help those who are not so tech-savvy, but for advanced users, it will be a headache if installing multiple nodes. 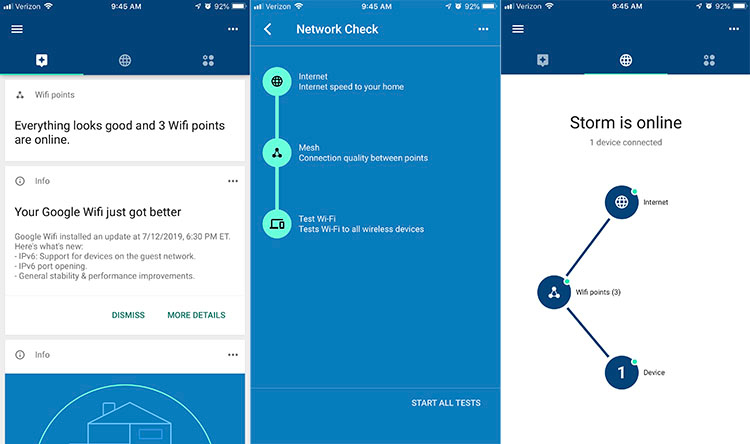 Instead of setting this up in my home, I got to install it in a single floor office that had multiple environmental challenges making a regular network setup difficult. There was no Cat5 or Cat6 anywhere to be found and the building was built sometime before the 1960s. Running new wire would be almost impossible to cover almost 3000 square feet of space. Concrete and glass are everywhere, while computers and printers are well spaced out and network traffic is heavy. The first node was installed in the central office by the modem, while the second went to the far right (by most of the printers and PCs) and the third one went into the far-left office that has a few devices, one of which needed a wired connection. In addition, there are four Arlo cameras set up around the property, one of which is 75 feet away from the building. It’s a challenging network to be sure.

After the 10-minute setup and a quick update, the system roared to life. I ran a speed test and got 406Mbps down and a 20Mbps upload, with excellent speeds even out to that lone Arlo camera. Since installing the system about a month ago, I have not seen the network go down once. Heat output is a non-issue. My TP-Link Deco nodes at home run hot to the touch, but the Google nodes are barely warm. I see no reason why this system wouldn’t last a few years until you would need to upgrade. The range was also a pleasant surprise, I feel it’s at least 20-30% better than the TP-Link Deco system I previously tested.

Would I Buy It?

For a home or office that suffers from an awful network setup, Google Wi-Fi is an excellent option for just over $200. While I have recommended the more-expensive Eero network in the past, other mesh networks are quickly gaining speed and features for far less money. I still use my TP-Link Deco system I got on sale nearly a year ago, I currently see no reason to upgrade as I don’t need as much range as I do at the office. However, if I were still on a traditional setup, I would be considering the Google Wi-Fi, just as much as the TP-Link.

I am quite happy with the Google Wi-Fi system. The nodes themselves look clean and well-designed. Speeds are excellent and the app is very simple and helpful for keeping the system up and running with little effort. For users looking for a middle-of-the-road mesh network that need something plug-and-play, this is the best option, but there are cheaper products out there. That being said, it’s hard to find any real downsides to Google Wi-Fi. It’s a solid option at a good price point.

THE HIGH END 2021 MOVES FROM MAY TO SEPTEMBER