Up NextWhich Music Streaming Service Is Best For You
It’s an interesting question to ponder. In this world that seems to constantly gravitate to the newest and greatest item of the moment or pushes the latest emerging trend, what do we have, from an audio standpoint, that is of true value and actually lasts?

It doesn’t help either that, as hobbyists, we are constantly susceptible to catching the “upgrade bug” and the industry we follow is all too happy to oblige that sickness with all kinds of shiny new remedies. Is periodically moving on to the latest and greatest really a good value in the long run? This whole notion occurred to me as I was swapping out a piece of review gear from my two channel rig and reconnecting things back as they normally are. All my 2 channel audio gear has seen some sort of turnover in the past 10 years. The only piece of equipment that has consistently stayed with me through numerous other changes (of gear and life) has been my preamp. It will turn 20 years old in a few months. It’s a Bryston, the BP-25 to be exact. 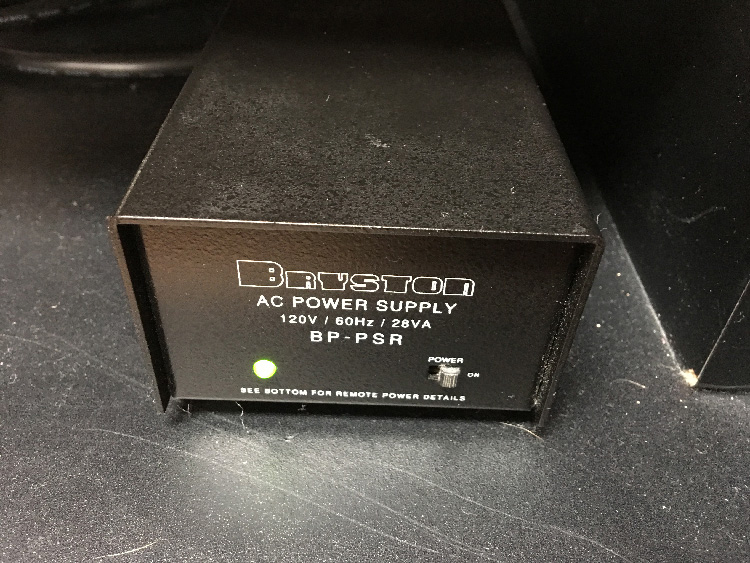 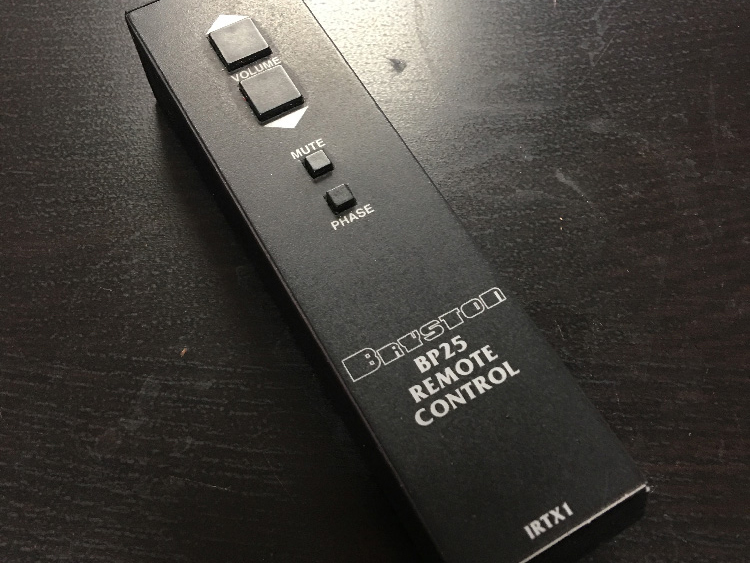 It’s a very simple looking and streamlined unit, very much in the typical Bryston style. The face of the unit has only 3 knobs, 4 mini toggle switches and a headphone jack. The rear is tidily organized with both RCA and balanced XLR inputs and outputs. It also comes with a small external power supply and a basic remote that is heavy enough to give someone a concussion if you got angry and pitched it at them. I purchased it in the early part of 1997, brand new, from a little stereo shop in Pasadena, which was not run by a little old lady by the way. I was in the market for a preamp and the reason I purchased the Bryston was that every review I’d read on it said essentially the same thing. That it was practically bulletproof and that it was the closest thing to a straight wire with a gain that I could find (and afford, barely) at the time. I wanted something that would not molest, in any way, any source that I routed through it. Just input switching, tape monitor, volume and that’s it. Sounds simple, right? Well it definitely takes some skill to design a quiet analog component, and have it remain consistently so after all these years. It has since travelled across the country with me and been unfailing in its operation, never once giving me even a hint of an issue. It’s very clear to me now why Bryston warrants their gear for 20 years. It’s still essentially noiseless. Turn the volume wide open with no input signal and you will hear not a peep of noise coming through my speakers. I began to wonder though, how does the BP-25 stack up against more modern components?

I mean it’s 20 years old, surely things have come along that have surpassed its performance since then. I decided to go ahead and subject my trusty old preamp to a few of our standard bench tests and hoped it would make a half-decent showing for itself. The benchmark tests were conducted through the analog XLR inputs and outputs. The source device was a LYNX Two professional PC sound card using test signals created by SpectraPLUS audio measurement software. Measurements were done at 2 VRMS and 5 VRMS respectively. 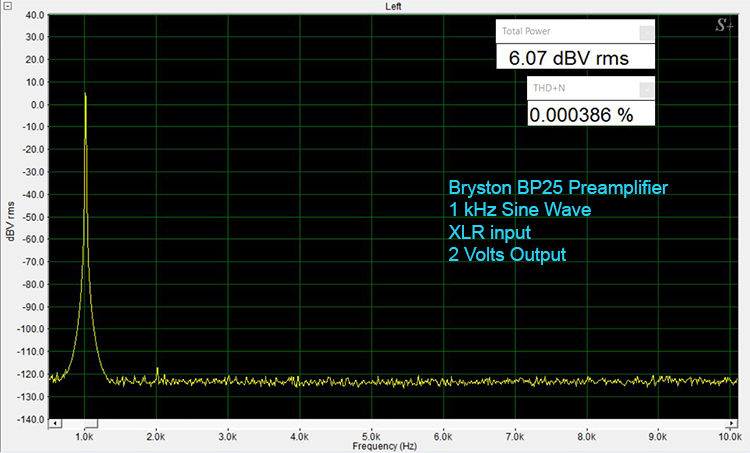 At 1 kHz into the XLR input, THD+N was 0.000386%. We see almost no harmonics throughout the spectrum with barely a visible second harmonic at 2 kHz being about 118 dB below 2 VRMS. This is outstanding performance. 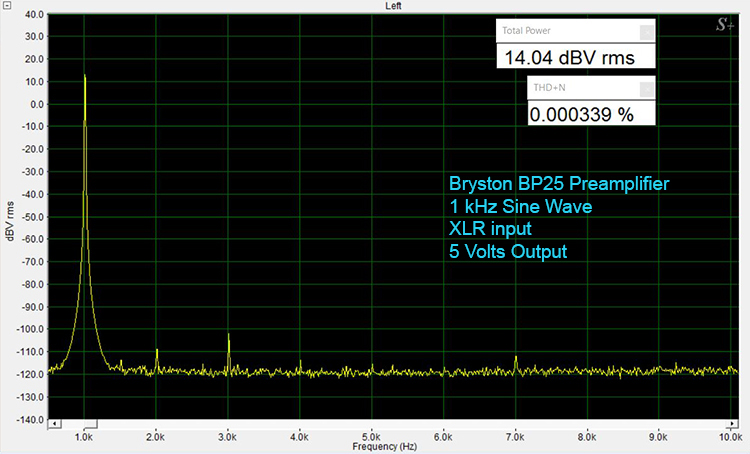 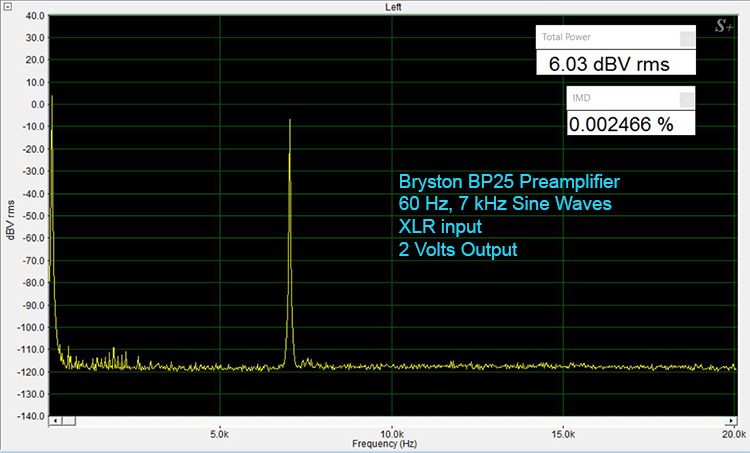 The IMD measurement using the XLR input was 0.002466%. We see very minimal noise spurs on either side of the fundamentals and no visible second harmonic. 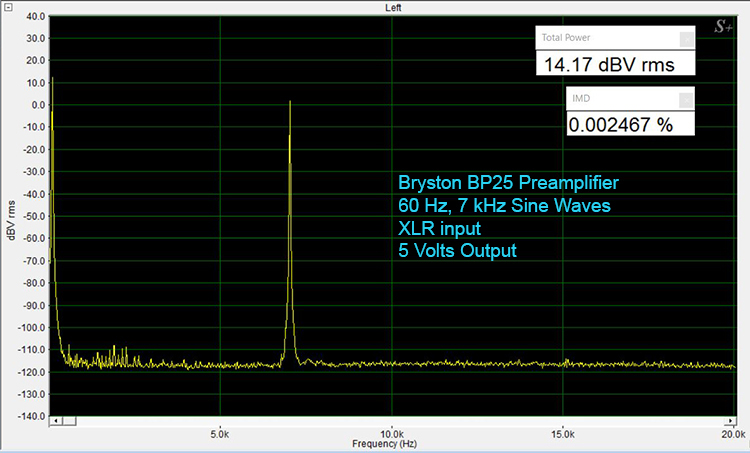 The IMD measurement using the XLR input was 0.002467%. An almost identical measurement and spectra to the 2V graph. 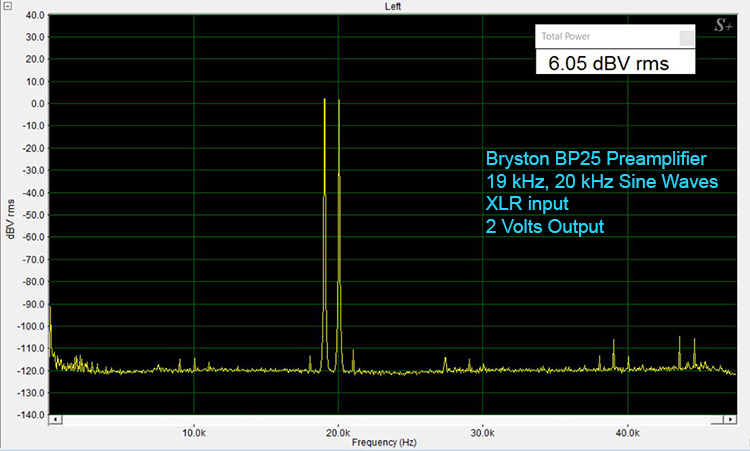 Here are the results for the 19 kHz, 20 kHz combined test frequencies using the XLR input. There is no visible B-A peak at 1 kHz. We see minimal distortion spurs throughout the spectrum. The second harmonics at 38 kHz and 40 kHz are about 112 dB below 2 VRMS. 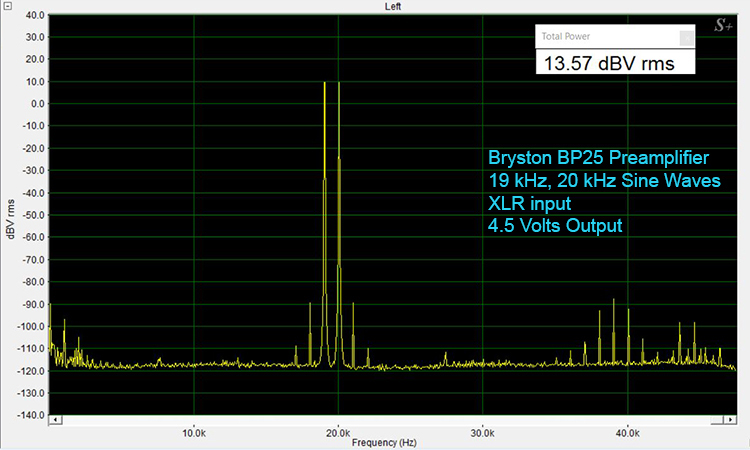 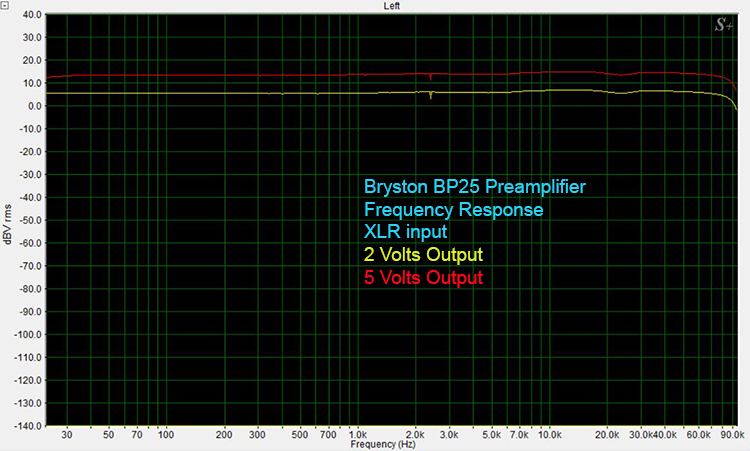 I measured the frequency response of the BP-25 out to 96 kHz. Through the XLR inputs, the response is flat out to about 70 kHz and then we see a gradual roll-off of the high frequencies at 80 kHz. Note that the minor “tick” at 2.5 kHz and shallow dip past 20 kHz are artifacts from my measuring setup.

As you can see from the above graphs, not only does this old piece of kit sound good, but it measures pretty darn well at 20 years on. Sure you could find something that measures even better today but I think you’d be spending a good deal of money to get a modest improvement that may not even be subjectively detectable. Then there is always the temptation to upgrade to Bryston’s newest preamp model, but I admit to have grown quite attached to my BP-25 over the years. And I know if something were to happen to it, Bryston would service it, without a hitch. So for the time being, she’s still going to be a keeper. You know the old saying of; when you make a mistake, you learn from it and move on? Well it’s nice to know that the good choices we sometimes make, can occasionally follow us around for a while too. The Bryston BP-25 has been one of my better audio purchases in life and I consider it a true and lasting value as a component. Just thought I would share.