Up NextFluance RT80 Classic Turntable
Bluesound was nice enough to send me over some new gear to test out.

I will be honest and say I haven’t heard of them until I got these units in for review, so my expectations and impressions were very fresh and unbiased. Bluesound sent me two products, the Pulse Sub+ and the Powernode 2i, each with some unique features that I will touch on later in the review. They are whole-home audio products controlled with an app from your phone or tablet, that are easy to set up and move around as needed. Let’s jump into the review! 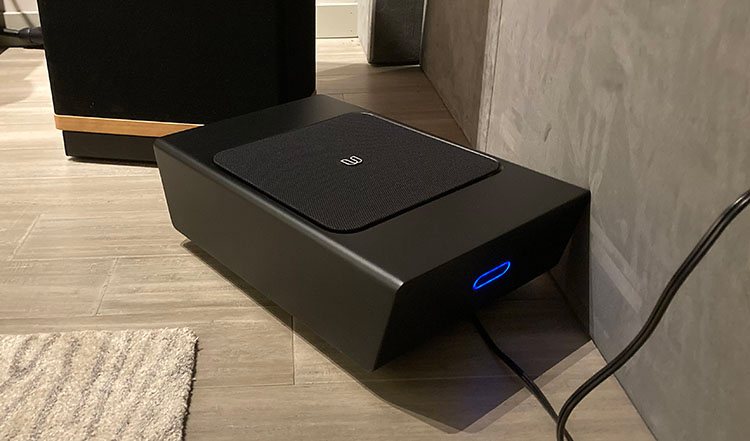 First, let’s jump into the Pulse Sub+, which is larger than I expected. After unboxing, my first impression was, which way is up? According to Bluesound, any answer is correct, as it’s designed to be mounted in a variety of ways, even on the wall with an included bracket. It felt odd putting this sub on its side, but it sounded great anyway. I also listened to it on its back which I feel sounded the best, but also left it open for damage by pets or kids since the driver points upwards. Not sure on how to balance it between safety or sound I just put it on its side in the corner and started listening. 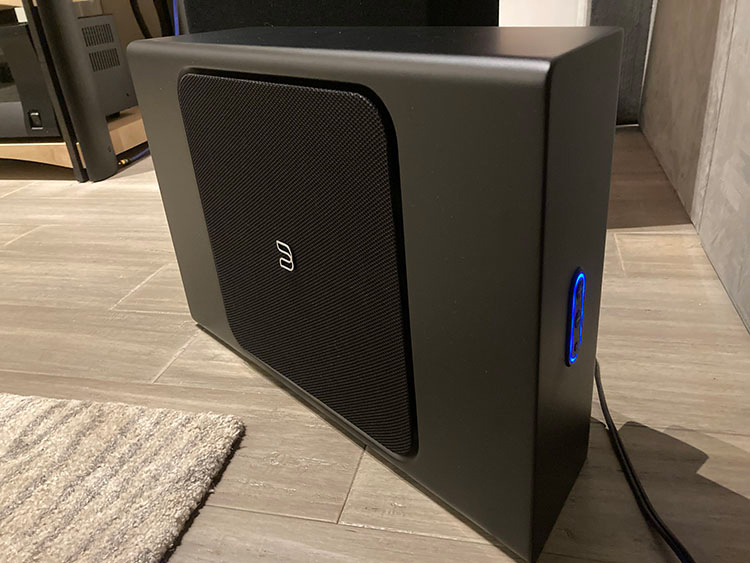 I find it hard to compare bass between systems like Heos, Sonos, and others because the sub only works with the system it’s designed for. The Pulse Sub+ performed admirably, delivering thunderous bass with grace. Not much distortion or noise ever was heard, just deep strong lows. I wish I’d had a second one to try out in a dual sub configuration, as this is a feature that is possible with Bluesound. I dug into the manual a bit and really liked how Bluesound provided so much great advice on how to set up and tune in the sub. It’s only nine pages long but well worth the read!

A theme I am discovering as I dive deeper into the Bluesound line is that they are, in my opinion, merging the realms of the custom AVR setup and the all-in-one systems into a bit of a sweet spot. For example, many brands limit you to just one sub per zone. Bluesound not only allows it but also encourages custom setup options. While the freedom-from-choice approach has worked well for brands like Sonos, Bluesound is giving the audiophile what they want, options, outputs, and inputs galore! Don’t want or need to run this sub wireless? No problem, you can hardwire it! Wrapping up the sub, I would have liked to see a more visually attractive design, it’s a bit plain. My WAF (wife acceptance factor) was quite low for this unit, but for the features, easy setup, and flexibility it offers, it’s worth it. 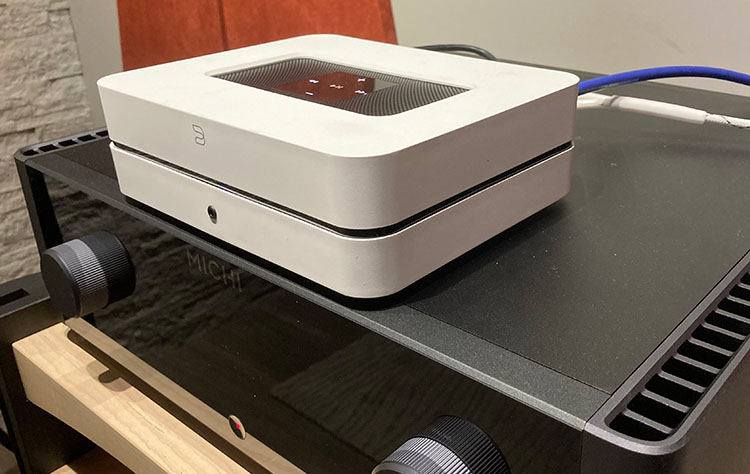 Next up is the Powernode 2i with 60 watts per channel into 8 ohms and boy this little guy really packs a punch! I drove a few pairs of Monitor Audio towers and bookshelf speakers with this amp and overall, it sounded very good. Much more impressive is the 2i’s ability to drive large speakers. Other amps in this class can sound lacking under heavy loads, but not the 2i. The music sounded crisp and full, I never felt like I was pushing the amp too hard at higher volumes, it just felt ready with more power at all times. Its power delivery and quality are well worth the $899 price tag. 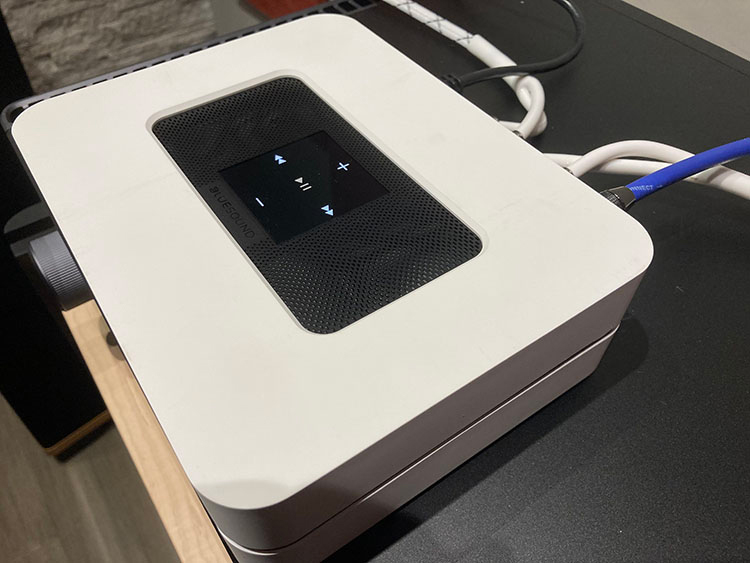 Once the hardware is installed, you’ll be spending most of your time in the Bluesound app. A major part of whole-house audio systems is the app, it controls everything from power and volume to what’s being played. Setup was easy, but not the best I’ve seen. To get a better understanding of the average user I had my wife try and set up the amp on the app on a fresh install. It went well until it didn’t show up on the Wi-Fi network on her phone and I had to step in to figure it out. Adding music services was very simple, only requiring us to sign in. It’s easy to create playlists and start listening; this part was all very well laid out and worked flawlessly. Since I only had the review units for a short time, I didn’t get to test long-term reliability. If you’ve had a Bluesound system for a while, please let me know your experience in the comments below. 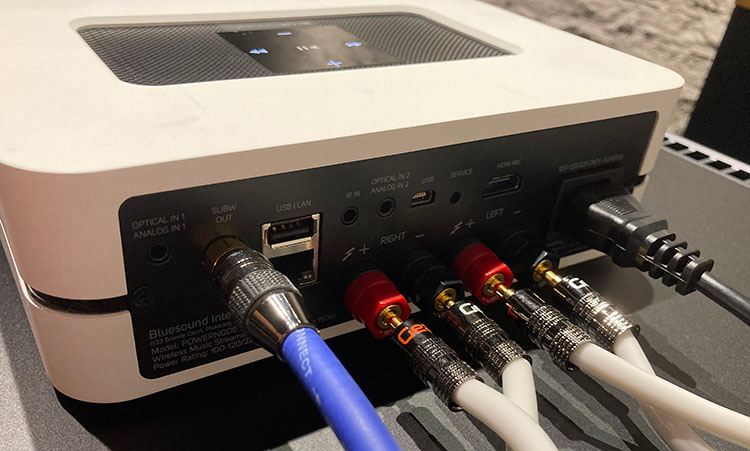 The big question I asked myself while trying out these products was, how does it compare to Sonos, Heos, and the other players in this realm of easy home audio? All I can say is I am tempted, very tempted to try and buy more Bluesound components. I would really like to try out some Pulse Flex 2i’s around my house and see how I like them because Bluesound showed me a lot of promise from the amp and sub I reviewed. This is the first wireless system I can truly say goes head to head with Sonos. Not because they beat them at their own game, but because they bring audiophile elements to the table that other brands, don’t. Dual subs? Yes, please! No login to use the app? Yup! A streamer and CD ripper? Oh yes! Keep up the good work Bluesound, I like how you think. I can’t wait to see more of Bluesound and see this system fleshed out with more products and innovation. It’s a win in my book. 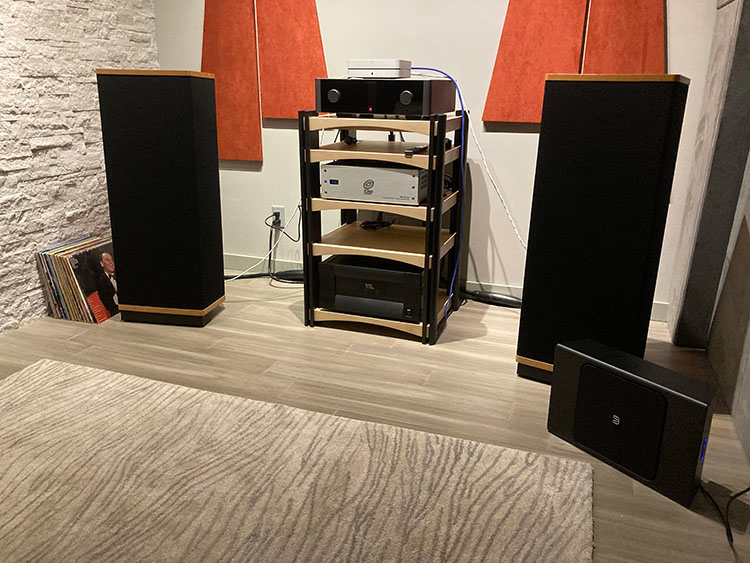