Up NextISOAcoustics Aperta Sub Isolator
AudioControl sent me a beast of an amp, the M4800 from its Director Series.

It’s not a beast in the sense that it’s physically large but in the sheer volume of options, features, and specs this 1U component contains. I was overwhelmed by the amount of customization, features, inputs, and control options that are possible with the M4800. Let’s jump into this awesome beast of an amp!

Bridgeable to 400 Watts of Bridged Power.

Built-in Matrix Delivering Analog or digital inputs to be routed to any zone output on single or multiple amplifiers.

Assignable Names for All Zones & Amplifier.

Pulling it out of the box, I was expecting more heft to something this feature-packed and powerful. This isn’t your run-of-the-mill smart amp or home theater amp. The M4800 is a serious multi-zone matrix amp with control in mind. It’s a compact 1U (1 rack space or 1¾” tall) footprint with a full eight channels at 100 watts into 8 ohms, all channels driven Inputs include coaxial, optical, and analog RCA to interface with just about any component imaginable. There is of course a 12v trigger and Ethernet LAN port on the back. Speakers hook up to phoenix connectors and there are plenty of status LEDs to quickly see what is up and running. There is nothing out of the ordinary here for a matrix amp other than the very compact size. Let’s fire it up and see what’s possible. 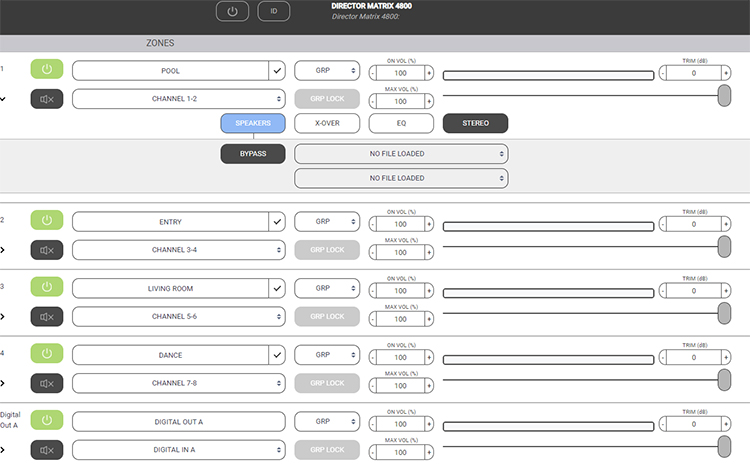 Setting up the M4800 was easier than I expected, simply plug it in to power and network, scan for the IP and open a browser, no software to download at all. After hooking up your inputs and outputs it’s time to start digging into the meat of this slim box. You can connect it to a third-party control system like Crestron, Savant, RTI, or Control 4 or simply use it as a standalone matrix. I won’t dig into the control options as there is a lot to each one, but instead focus on the GUI provided. I love the fact that you can jump right into the setup and go. I was able to set up a basic four-zone system in just a few minutes. EQ adjustments are a breeze, although a wireless mic option would be nice. One interesting feature I found was the alerts, so for example you can set an alert to email you if the unit becomes too hot, too loud, or goes over-voltage; very handy for integrators of any size or tech-savvy DIYers.

In most reviews, this is the important part, but this amp was not only designed just to sound really good, but to have extreme flexibility when installed. So, the variety of sources and types of speakers it will be driving can and will be highly varied depending on your install. However, the EQ settings are second to none with this amp. I was able to tweak some rooms to get them sounding really good, however, I would have preferred a wireless mic option as I’ve seen with other smart amps. AudioControl sells a number of microphone options and RTA’s that can be useful for more detailed calibration.

I read the manual and found this gem on room acoustics, “Room acoustics is a complicated subject about which hefty textbooks have been written, and entire galaxies have gone to war over. We simply want you to be aware of a few basics that have a direct effect on real-time audio analysis.” With that said, AudioControl recommends you use an RTA tool (like AudioControl’s SA-4100i) with pink noise to dial in each zone. This is a slow process and one that is no longer the modern way to quickly tune in multiroom audio zones, but it does work. All things aside, the M4800 is a solid amp, and with the right gear and knowledge, you can make it sound fantastic.

Because the M4800 was so packed with features and there isn’t a quick setup guide, I read through the entire manual, and boy oh boy, were there some goodies in there. I had to include some of these amazing quotes here, please enjoy.

The Warranty – “In just the same way as being covered in honey and thrown into a dark pit full of hungry woodchucks, people are scared of warranties.”

In Wall Volume Controls – “What happens to the in-wall volume control if the amplifier power is greater than it can handle? It will not be pretty but then again no one will die.”

“At all times, though, the laws of physics are hard to violate, although we do try our best.”

“Magazine reviewers and audio system owners spend much time critically appraising speakers and other audio components. Unfortunately, a phenomenon that has a very large effect upon sound is not easily judged or changed. That effect is the ACOUSTICS of the environment in which you are listening.”

“This may be as good a time as any to have “the talk” about ventilation.”

I would like to give the writer of this manual an A+, it made all 48 pages a treat to read through. Nice work!

Knocking it out of the park, AudioControl. Wow! The M4800 is a beastly amplifier in a tiny package. I think for AudioControl to really take it to the next level, it would need an app interface for both the installer and client, think OVRC style. The ease of setup and the helpfulness of the manual was excellent and made the M4800 a breeze to install. The M4800 definitely walks the line between integrator smart and home theater audio. Keep your eye out for more from AudioControl, I like this amp.